Evans Funeral Home and Cremation Services has a staff with over 100 years of combined experience.  We offer professional service in your time of need. If it is a traditional service, cremation, or something entirely different, the caring staff at Evans Funeral Home has the experience to take care of every detail and guide you and your loved ones through the process of planning final arrangements.

Trends in the way people take care of their loved one's final arrangements are constantly changing, and we at Evans Funeral Home are aware of these changes.  If a family and/or loved one wants traditional services, then we will try to help them accomplish their and/or their loved one's desired wishes.  If something that strays far away from 'tradition' is requested, then we will work hard to do whatever is needed to see that a family is satisfied with their choices.

Evans Funeral Home and Cremation Services at Chapmanville, WV, was founded in 1975 by Riley Joe Evans.  At the time of its founding, there was no funeral home serving the town and surrounding area. Riley Joe is still owner and operator of the funeral home and is involved in the day-to-day operations.

In 1988, a state-of-the-art chapel and other additions were added to the existing building.  The chapel, which will hold approximately 350 people, is still in use today. In 1997, a second chapel was added, along with other improvements, that will seat approximately 200 people.

In 2007, the funeral home was able to add a crematory retort to handle the changing trends in families’ wishes.  Since that time, a second retort was added to handle the increased request of cremation by a growing number of families. 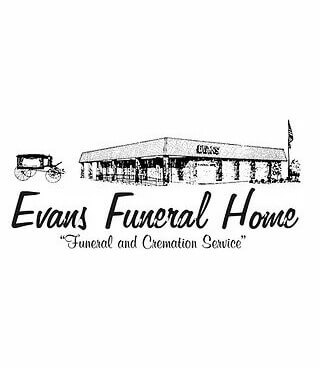 Our Family Serving Your Family

About Us
Our Family Serving Your Family
Our Staff
Dedication
Why Choose Us?
Testimonials
Contact Us